We Enjoyed Seeing You at Our 2017 Annual General Meeting and Festival of Cultures! 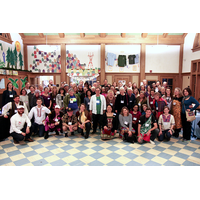 Many thanks to all who attended and volunteered at our 2017 Annual General Meeting and Festival of Cultures on January 28 at the Mission Pool & Playground Clubhouse in San Francisco!

After the general meeting, Lie led us ceremonially through the Peace Corps oath. Steven Elias followed with the icebreaker, which took us right into socializing at our Festival of Cultures. We strolled through the country and public service tables while sampling the extensive international pot luck and catching up. Many thanks to Adrianne Borgia, Dorothy Herzberg, Barbara Jue, Diane Lee, Gale Lederer, Genevieve Evenhouse, Jane Ferguson Flout, Lila Holzman, Matt Orr, Meredith Miller Vostrejs, and everyone else who provided displays for our information.

After that it was time to raffle off the delicious, home-brewed beer kindly donated by Isaac Pearlman. Ella Dowell took group photos, and then Lie "COSed" us to close the Festival. A few of us then participated in the after-party, at the City Center Hostel and breakfast the following morning.

Congratulations to all! It's going to be a wonderful year for our association!

Last year your Northern California Peace Corps Association hosted over 180 events. They were large and small; social, service-oriented, and educational; and they took place from Petaluma to Santa Cruz and from Sacramento to San Francisco.

We encourage you to organize a community event of your own this year, using NorCalPCA's resources to publicize it, fund it, and to gain support for it. Post your events to NorCalPCA's online calendar and email Events@NorCalPCA.org if you would like to request funding, resources, or volunteers for your event!

We look forward to seeing you at several of our many upcoming activities and events this coming year!