Clinton Etheridge served in Gambia from 1970-72. A July 2011 trip back to West Africa with his family inspired him to write a reflection piece, “What is Africa to Me?” for the Swarthmore College Bulletin. Read an interview with Clinton below and his article here.

Tell us a little about your background and where you served

I was a secondary school math teacher in Peace Corps Gambia from 1970-1972. I grew up in Harlem, came of age during the civil rights movement, and was a black student leader at Swarthmore College in the late 60s. Like many young blacks of that generation, I wore an afro and dashiki and was “black and proud” and fascinated with Africa. I joined Peace Corps Gambia seeking the answer to the question “What is Africa to me?” posed by Harlem Renaissance poet Countee Cullen in his 1925 Heritage. 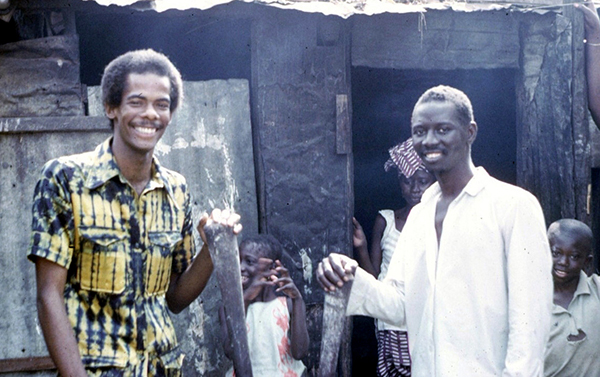 Clinton in Bajul, the Gambian capital, with his friend Ousman Njie (1971)

What was it like to be a person of color in Gambia?

As a black PCV in Gambia, I was something of a minor celebrity. Any time African-Americans came to the country, the Gambians would tell them, “You have to meet that black Peace Corps chap Clinton Etheridge.” That’s how I met Alex Haley.

I met Alex Haley in Gambia in March 1972, a few months before my two year Peace Corps stint would end and four years before his international best-seller Roots would be published—the story of how he traced his African ancestor, Kuntah Kinteh, to Juffureh Village in Gambia.

I knew of Alex Haley because he’d helped Malcolm X write The Autobiography of Malcolm X, which was a sacred text for us black college students in the 60s. When I met Alex Haley, I knew Gambia intimately, having visited every major town to help conduct math workshops as the Peace Corps Math Curriculum Development Coordinator. Given that background, I was dumbstruck when Alex Haley told me that he was in Gambia to go up river “in search of my ancestor.” As a grizzled Peace Corps vet, I couldn’t tell Alex Haley the truth as I saw it:  there was nothing there to find up river.

But oh boy was I wrong. In January 1977, when Roots was exploding on American TV, the full meaning sunk in of what Alex Haley was trying to tell me back in Gambia.

What inspired you to write "What is Africa to Me?"

I wrote “What is Africa to Me?” because I believe I had something important to say about being an African-American going to Africa twice: first as a PCV in Gambia and decades later as a father on a pilgrimage back to Gambia with his children and granddaughter. There are so many stereotypes about Africa. When I was growing up it was Tarzan. Nowadays, the stereotypes are about a continent gripped by poverty, disease, and civil war. To be sure, these stark realities are part of Africa today. But there is a more complex reality that is eclipsed by the stereotypes. That is why I believe every African-American should go to Africa at least once—if only for a little while—to get a reality check on “The Motherland.” 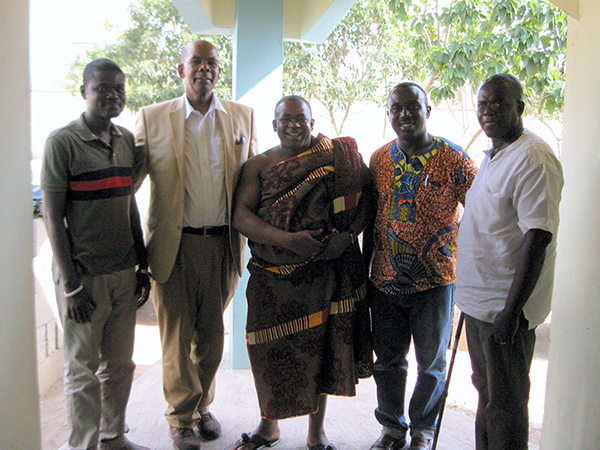 Clinton (second from the left) at a board meeting in Kumasi, Ghana for one of his customers as a Stanford business coach

How has being an RPCV helped you in your work since you've returned?

While teaching math for two years in Gambia, I became interested in African economic development. Consequently, after Peace Corps I got an MBA from Stanford Business School to help me apply my math background in a wider arena through the financial analysis of business and economic development situations, including those in Africa.

Since the Etheridge family pilgrimage to Gambia, I was a Stanford business coach based in Ghana, mentoring six high potential West African small and medium enterprises (SMEs)—four from Ghana, one from Nigeria, and one from Sierra Leone. As a Stanford business coach, I was seeking to reduce poverty in Africa by helping transform high potential SMEs into market leaders and world-class companies through a process that creates jobs and promotes economic development.

As a Stanford business coach, I was able to witness up close and personal “the new emerging Africa.” The IMF estimates that seven of the world’s ten fastest-growing economies from 2011-2015 were in Sub-Saharan Africa—Ethiopia, Mozambique, Tanzania, Congo, Ghana, Zambia, and Nigeria. Further, the UN projects that within the next 100 years, Africa will overtake Asia as the world’s more populous continent. As a black American, I started out asking the question, “What is Africa to me?”  But going forward, I believe the more important question will be, “What is Africa to the world?”

Read about Clinton's experience bringing his family back to Gambia here.

Clinton welcomes all questions, discussion, and feedback! You can comment below or email him at clintonetheridge@sbcglobal.net